You can buy a bouquet of flowers online to deliver at home addresses in Martín de la Jara or any other city in the province of Sevilla - And if you prefer you can call us for free at Phone 900264088, we will resolve your doubts, will take note of your order and you can pay for it with card.

In Telerosa Florist you will find the best home delivery service of bouquets in Martín de la Jara or in any other city in Spain, you can choose between a variety of different flower arrangements: baskets of roses, bouquets, eternal roses ... If it is more comfortable we have classified our bouquets and roses by categories such as: Birthday, Anniversary, Love, Eternal roses, baby, and even funeral, but we hope that the latest one was is not needed. You can make your order right now on this website or contact us at 910888018 (0034 910888018 from overseas) during business hours. You can also pay by credit card, PayPal or even with a transfer.

Find out in this video how we prepare your beautiful bouquets of roses and how we work in Telerosa Florist to always offer a high quality service of flower delivery at the best price in any city in Spain.

Depending on your selected gift we can deliver even today in Martín de la Jara or another city in Sevilla with Telerosa Florist can make this special date in a very special one and memorable day. Our bouquets and centers have some variations in price depending on the city and selected delivery date, but you can know the concrete price in Martín de la Jara for this on the upper bar please indicate the province, city and desired delivery date, we will show the price of each product for Martín de la Jara with VAT included, to know the total price including home delivery simply select the one you like.

There are many reasons that may give you a reason to send a bouquet of flowers with Telerosa Florist, for example, if you keep a long distance relationship and want to have a detail today with your couple and tell her how much you love and miss her, Telerosa Florist offers you an elegant bouquet of RED roses. This colour symbolizes the love and passion. You can also send it with a teddy or chocolates and all together with the message of love that will dictate your heart. Telerosa will arrange to deliver it wherever you prefer; at work, at home ... This special day your beloved person can receive your flower bouquet in Martín de la Jara so even though you're away your feelings are a little bit closer.

And if you really have an amazing love story, send it to us at our email info@telerosa.com and maybe we will publicate at our blog blog.telerosa.com. You know, Telerosa, easier way to send your roses in 41658 or any other city of Sevilla 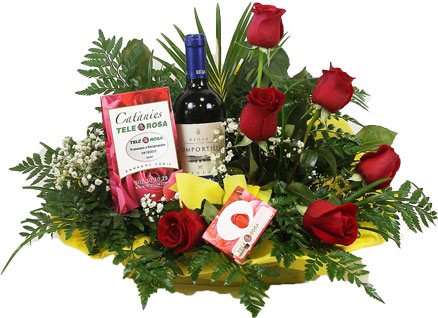 Telerosa Florist wants to introduce you the wide range of products, bouquets and baskets of flowers to deliver at home  in Martín de la Jara or in the rest of cities in Sevilla, the "Rioja wine with Roses" an original composition of six fresh roses, fern, goldenrod, and a box of chocolates with a Ribera del Duero wine or Rioja, specially designed for Him.

You can have the color of roses as you like, but in this case dominated color of the roses is the red or yellow, depending on the reason of the gift.

An ideal gift for dad, grandfather, your partner or in a special date like birthdays, saint or father's day. Who said that roses weren't a guy thing?

Now Telerosa creates a custom designed product, so they also feel special and can enjoy the elegance of roses in Martín de la Jara, along with the pleasure of enjoying a good wine celebrating a special day.

Telerosa Florist offers our customers a huge variety of hues for you to choose your favorite. But each color has a meaning and that is primordial when deciding which color to choose. Today we speak of BLUE, highly demanded in the eternal roses that Telerosa Florists offers. Blue conveys freedom and sincerity. Symbolizing self confidence, harmony and affection, making it an excellent choice for a recipient or family member. Other flowers like Delfinia, cyani flower or cornflower are also characteristic for having this peculiar color.

If this globe appears on the bottom left of your screen means that at this time an operator of Telerosa Florists is available to answer any questions you may have about our website, is an online chat that only appears when we are open and available to help you with any questions about our products or operation, you only have to click on the balloon and ask what you want.

The Bouquets of flowers in Martín de la Jara from Telerosa

The bouquet of flowers is the gift more oldest known, every day Telerosa Florist design new forms and presentations of them, because demand doesn't decrease, the emotion that produces a bouquet of flowers delivered at work, at home, in a hotel or wherever you are is something really special. Our florists are careful in the design and preparation to each one as if it were the first they made, because we know the emotion that make to our customers and the surprise when one of our delivery drivers in Martín de la Jara or in any other city in Sevilla give your gift.

For your birthday Telerosa Florist deliver at home in Martín de la Jara the flower bouquets more spectacular, so you leave to that special person with the open mouth in his celebration party. Your gift may be the most surprising one , you can choose from our entire assortment birthday section in our catalog. Don't doubt it and visit our website www.telerosa.com and choose one of our presentations to congratulate with flowers, Telerosa Florist shared birthday wishes in Martín de la Jara and in all Spain..

If a baby has just been born in Martín de la Jara, Telerosa Florists delivery your bouquet of flowers and roses to congratulate the new parents with an original and exclusive form. Our baby catalog is designed so you can choose from a variety of arrangements and bouquets for a boy or a girl. This unique day is worthy of an unexpected and wonderful gift Telerosa Florists can deliver on your name in the hospital or at the home of the newborn baby.

Who said that roses weren't a guy thing? Times change and that's why Telerosa Florist offers you a selection of elegant bouquets and centers of flowers designed thinking on them. Because flowers were, are and will be always beautiful... and men today have learned to enjoy the emotional, visual and olfactory pleasure of the flowers. Now that you have it clear, if it's your anniversary, a birthday or just because you want to... you should surprise your man with a beautiful bouquet of roses of course from Telerosa Florists in Martín de la Jara or wherever he is.

Get out a smile to that woman from Martín de la Jara with Telerosa Florist, for her birthday, celebration of her saint, the anniversary or just because you want to make this day unforgettable for both, Telerosa offers many possibilities within their catalog but it's you who must select the perfect for the occasion and one of our delivery drivers will deliver your surprise bouquet of flowers at work or home in Martín de la Jara.

You can view all our deals on the tab of the top bar. There you'll see our best products at a special price for a limited period, so don't miss out the opportunity to enjoy for a minimum price your best bouquet of flowers, place your order today for delivery in Martín de la Jara with Telerosa. Telerosa Florist it's your best deal.

With Telerosa you can enjoy an original rose that never withers, is the eternal natural roses, which we have in the most varied colors: pink, black, blue, orange, yellow, white, red ... they are completely natural roses we submit a process of removing hidratation to keep them as if they were alive for years. We prepare them in baskets, bouquets, centerpieces, etc.. they area available for delivery in the peninsula of Spain and all cities of Martín de la Jara by  courier service.

Telerosa Florist has a section in their catalog to be with you also in the more complicated moments and transmit your condolences to family, friends or clients. We have a funeral service florist and prepare  funeral wreaths, funeral cross or palm of roses, we will deliver in the most urgent way possible in any funeral of Martín de la Jara or another city in Spain.

With Telerosa you can deliver in any home of Martín de la Jara or in any other city our flower bouquets, because we know how special is for our clientes the moment of the surprise for the destinatary. That's why Telerosa Florist has the best delivery service of your flowers, to guarantee your bouquet arrives in perfect condition. You will also receive an SMS to your mobile when delivered for your tranquility.

On Valentine's day Telerosa is the authentic symbol of love, because we prepare our bouquets of red roses for love as anyone. Around the world the celebration of  Valentine's day is celebrated on February 14th and everywhere the perfect gift for your sweetheart is a bouquet of red roses. On each February 14 th Telerosa Florists get the wings to deliver to domicile thousands of bouquets of red roses all over Spain and of course also in Martín de la Jara. Also, if you order your gift before 10 of February you can enjoy all our deals and promotions for Valentine's you can buy at the best price, don't doubt Telerosa Florists it's the best choice for your bouquet of roses for your Valentine.

For Telerosa the security in the payment it's essential, that's why we give the possibility to pay online with PayPal or by virtual dataphone directly in the page of the bank https, in this cases Telerosa never have access to your credit card.  You can also pay by transfer with your bank, in that case you need to buy your gift with at least two days in advance of the desired delivery date.

The fastest and most comfortable way is paying with your card by phone. You can make your order online and select card payment by phone and we'll call you to handle the payment, in this case the payment is made during the same call, once the payment its confirmed the credit card details will be automatically deleted.

Telerosa can send flowers bouquets to Martín de la Jara and also to: 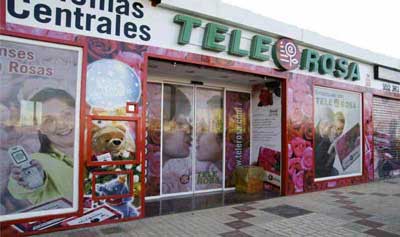 We deliver roses and flowers in Martín de la Jara to celebrate birthdays, make an appointment or send a message of love.