Please wait, we are searching for you
Home>▷ Funeral Flowers in SPAIN 【Funeral home † Cemetery】

If you need to send funeral flowers in Spain you are in the right place, our network of florists allows us to reach all cemeteries and funeral homes to deliver funeral flowers anywhere in Spain! In addition, you can place your order quickly by phone at 0034952363464.

We have all kinds of funeral flowers with express delivery in Spain, to send to funeral homes and cemeteries throughout the national geography. If you wish, you can see our specialized catalog of mortuary articles and flowers and when you have chosen the product that you like the most, you will only have to place your order online or by telephone and we will take care of send your funeral flowers in any city in Spain.

Given the haste and certain urgency with which these orders are sometimes made, teleROSA has collaborators distributed throughout the national geography to be able to perfectly attend to your order and arrive on time at the wake or funeral to express your condolences and deliver your funeral flowers in any city in Spain.

*Our funeral arrangements have, without exception, a tape on which to write a family reminder phrase, an appointment or the name of the deceased.

Funeral Bouquets to Funeral Home and Cemetery in Spain

To say goodbye to our loved ones, teleROSA offers you different options funeral flowers with shipment to cemetery and funeral home in Spain how can they be: funeral flower bouquets, Funeral Center, Funeral Cross, Funeral Palm, Funeral Wreath... all of them in different sizes and prices, from the cheapest to the most spectacular.

teleROSA has a service sending bouquets of funeral flowers to any funeral home or cemetery in Spain in a matter of hours, you can place your order on this website or by calling 0034910888018 if it is more convenient for you.

You can buy both Funeral bouquets to deliver in Spain as well as a flower crown, or another funeral arrangement from teleROSA on this same website, simply by selecting the flowers that you like the most from our catalog of funeral flower bouquets, indicating the city, the Funeral home or cemetery to send your flowers and the name of the deceased. 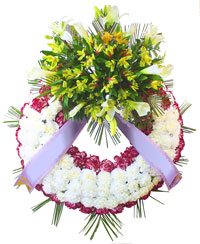 Funeral Wreaths to Mortuary and Cemetery in Spain

If you are looking for an affordable option for a funeral wreath to send to Spain, Florist teleROSA has the economic funeral wreath that has the best market price; maintaining an optimal level of quality to more than fulfill the bitter process of sending flowers or funeral wreaths to a loved one in Spain.

The Funeral Wreath is a floral arrangement with a round shape, it is a ring whose diameter can vary between approximately 20 to 60 inches, around which the flowers that in each case are going to be used are intertwined, usually carnations, varied seasonal flower or roses, accompanied by different greens to create a greater contrast and leafiness of it.

At the top of the Funeral flower crown that you are going to send to Spain, you can place a headboard, that is, a supplement added with greater abundance and stem length, which can be of the same or a different flower from the one used in the ring of the crown, in order to enhance its composition. Likewise, in the lower part we could also place a second headboard similar to the main one but a little smaller to give prominence to the upper one.

Usually the center of the ring is usually free of flowers, although tastes are colors and for those who request it for a little more, longer stems of flowers can be placed in the central part to completely cover the center so that instead of a ring we would have a circle of flowers.

At present, the ring itself is usually made of spongy material, and before starting the puncturing of flowers it is abundantly wet so that it absorbs a large amount of water that is subsequently supplied to the flowers to prolong their life.

A ribbon of about 3 inches wide is usually used to place a short phrase generally in memory of the person, family or company that has given the crown, it is a form of farewell and respect towards the deceased.

The flower crowns for funeral home with delivery in Spain is one of the flower arrangements with the highest price that is prepared in florists depending on the diameter of the ring, the type of flower used, the quantity and the number of headboards of the same, we can find them in a range of prices between €100 and €600, with an average of €200 being the most common price for this item.

Of course, at teleROSA Mortuary Florist we have the most beautiful and cheapest funeral wreaths to send in Spain on the market. 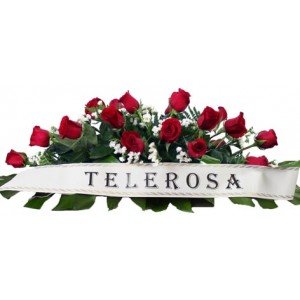 Funeral Spray roses to Funeral Home and Cemetery in Spain

The Funeral Spray roses o Funeral Palm is one of our funeral flower arrangements to send in Spain, which in this case goes with roses, although it is also prepared with other flowers, with an elongated shape simulating palm leaves, that is, ending in a point with one or both ends, being in the central part where we place the sponge base and a greater abundance and height of flower so that we get a greater central volume and thinner ends at its tips.

Like almost all funeral flower presentations that you can send in Spain, it is presided over by a band with the printed name of the company, family or person sending the flowers to convey their sorrow and condolences to the relatives of the deceased.

Its price can vary depending on the size and especially the type of flower with which it is made, between €70 and €180 approximately, the highest price being those of roses since it is one of the most sought-after flowers. 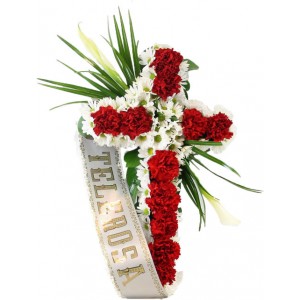 Funeral Cross to Funeral Home and Cemetery in Spain

The Funeral Cross with shipment in cities of Spain is another form of floral decoration specially designed to honor the deceased, as its name indicates, it is built in the shape of a cross and is widely used for cases of death of minors, often in color white as a symbol of purity.

As in any other funeral arrangement to send in Spain, it can be made with any type of cut flower, roses, carnations, etc. or through a combination of different flowers with the same or different color to give it the finish preferred by the client.

The usual sizes can be between 20 and 40 inches in height, although it is possible to get larger ones for other types of events. In the case of funerals, the arrangements are hastily made and therefore we have to use the supports available in that moment that are usually the most requested.

It is usually presented with a reminder ribbon from the company, person or family that sends the funeral cross and in terms of price depending on the height and the type of flower chosen, it can vary between approximately €70 and €200 for standard sizes. 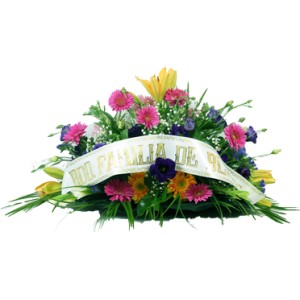 Funeral Centers to Mortuary and Cemetery in Spain

Our funeral center with shipping throughout Spain is a funeral home floral arrangement with a rounded or elongated shape that is presented on one or two sides depending on the client's preference or the florist's punctual availability, generally combining flowers and greens of different types -depending on the tonality that we want to achieve- on a sponge base with water to keep the flowers fresh and radiant for as long as possible. It is usually accompanied with decorations or bows in shades of purple and white.

It is usually smaller and cheaper than other funeral details to send in Spain; and their prices - always conditioned by the type of flower used and the size - range between approximately €50 and €110.

All funeral arrangements priced over €80 include a band to put the short message you want, however, for lower-priced bouquets or funeral centers you must request it as a complement.

¡If you are looking for a beautiful funeral center to send to cemeteries in Spain, it has teleROSA!